Combining the lightweight handling of a stand-up paddleboard with the speed and maneuverability of a kayak, the all-new Hobie Mirage Eclipse may be the ultimate touring and fitness watercraft.

by Carly Hylen for OutsideDaily

A couple months ago, a friend tagged me in her Facebook post: Carly, you have to try one of these!

Curious as to what had her so excited, I clicked on the post and a video of the newly released Hobie Mirage Eclipse began to play.

“This really IS something different,” I thought to myself.

The Mirage Eclipse is a stand-up board that uses Hobie’s signature MirageDrive hands-free pedal drive. “Step on and go!” read the headline as men and women of all ages powered through small waves and flew across glassy blue waters by moving their feet and steering effortlessly with handlebars resembling a bicycle.

In between clips of people doing flips off the board and pedaling with their dogs, I couldn’t keep the excited grin off my face as I wrote back, “Actually, I get to demo one next week!” I was anxious to see for myself why there’s so much buzz around this innovative watercraft. 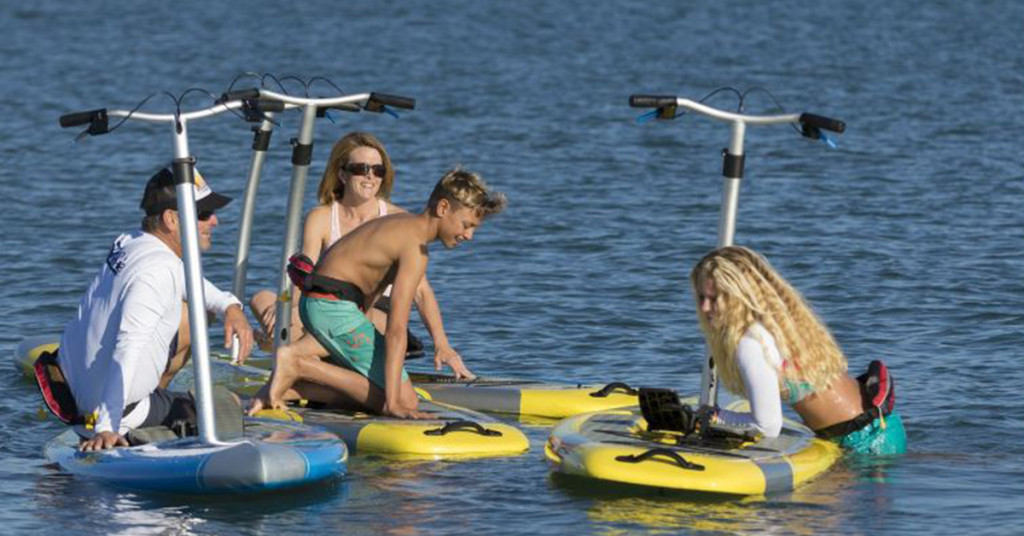 I had limited experience with stand-up paddleboards before trying the Hobie Mirage Eclipse. When I have tried SUPs, simply climbing on board was nerve-wracking. I’d start on my knees and try to stand up while simultaneously avoiding flipping the board. The Hobie Mirage Eclipse had none of that awkwardness. The handlebars pulled double duty as a handrail to steady myself as I stepped on the deck. In fact, I could step directly onto the board in shallow water without first having to kneel. The board was amazingly stable and forgiving while I got myself balanced on the low profile pedals that connect to the MirageDrive. 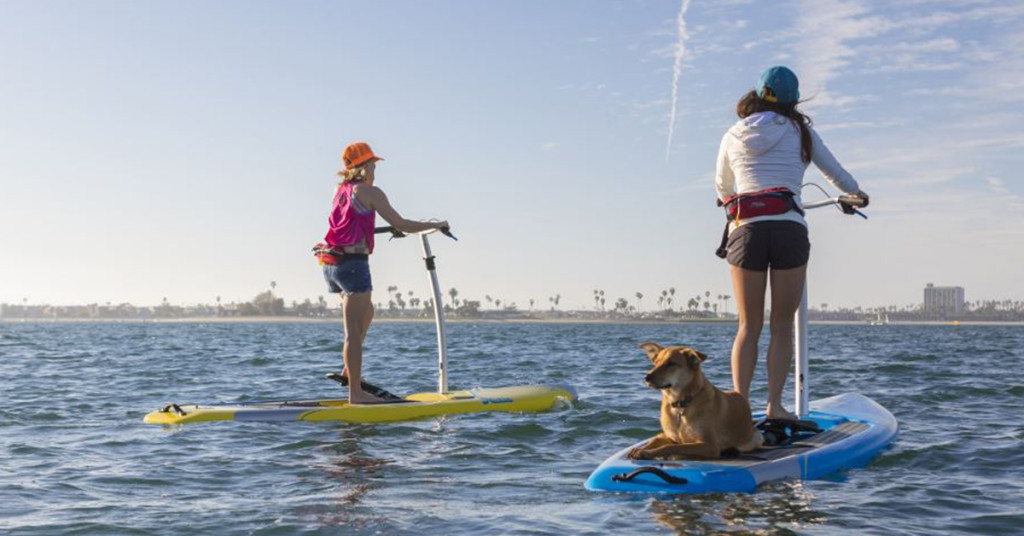 I had heard people describe the Mirage Eclipse as an experience similar to using an elliptical machine at the gym. I personally thought the stand-up MirageDrive required more of an up-and-down movement, such as a stair-climber. Either way, the board exceeded my expectations on speed, allowing me to create small wakes while pedaling at full power. Just like using an elliptical or stair-climber, I felt the “workout” in my calves and thighs. One thing’s for sure…I would much rather work out on the water than in the gym.

As an added bonus, I could actually enjoy the scenery of the lake, watching boats zip back and forth instead of devoting my full attention to balance and steering. The handlebars include right and left rudder control levers to make steering unbelievably simple. At first, I took the turns slowly to avoid unbalancing the board, but before long I was making pinpoint turns and crossing my own wake with no problems. Even on a windy day, the Hobie Mirage Eclipse handled small waves and boat wakes without issue. I actually tried to rock back and forth to see how far I could push it before losing my balance, but the same movements that would have sent me flying on a conventional stand-up paddleboard barely fazed the Hobie Mirage Eclipse. 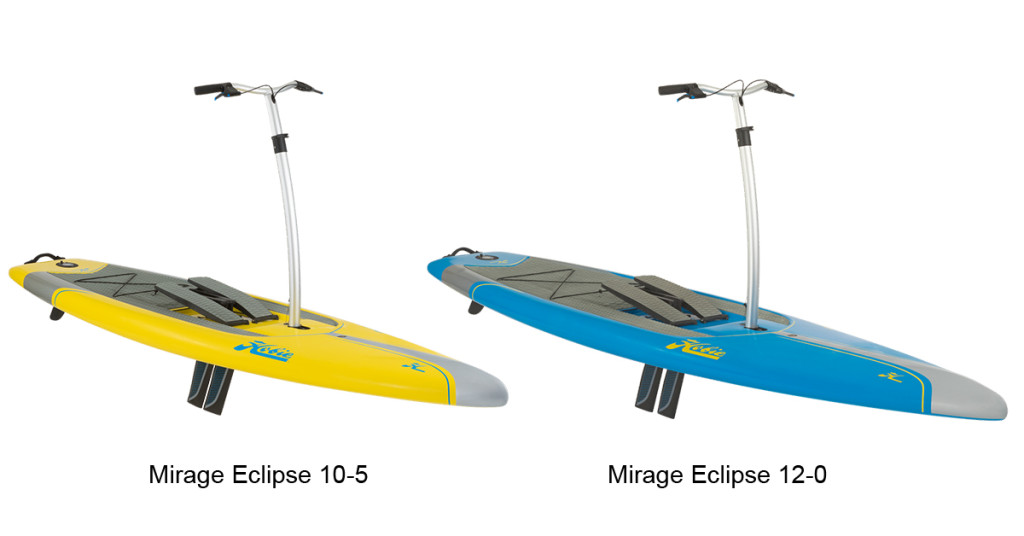 The Hobie Mirage Eclipse comes in two models—a yellow 10.5-foot version and a blue 12-foot version. Since I’m almost six feet tall, the 12-foot model felt more natural for my height, and I preferred the extra speed and stability from the larger board. The 10.5-foot model worked just as well, but shorter adults and youth might find its size to be a more comfortable fit. 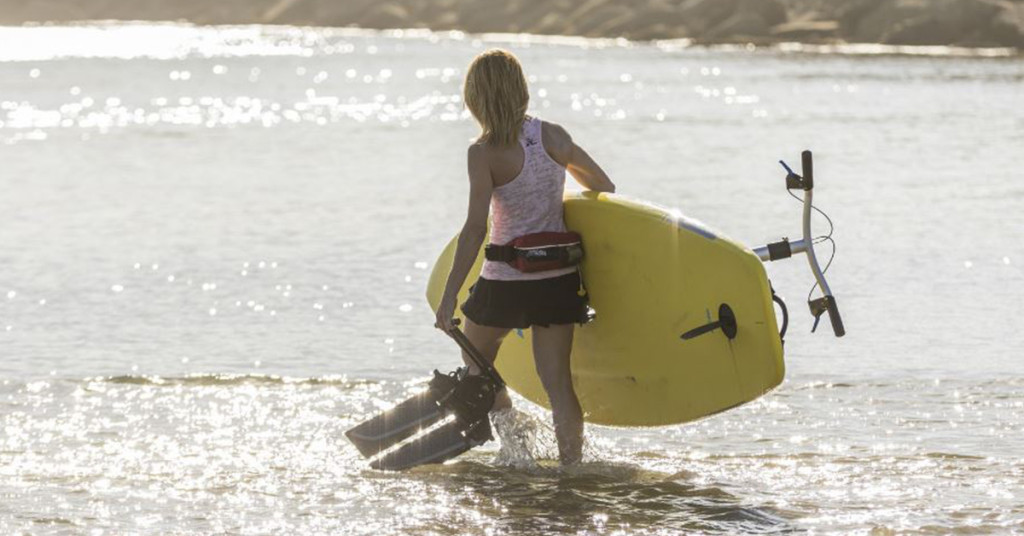 I’ve played on other paddleboards since trying the Hobie Mirage Eclipse, and I still catch myself looking for the foot pedals and missing the effortless exhilaration of gliding across the water. The board is so stable and versatile that you’re only limited by your imagination as to how you use it. I could tie down a dry bag with water and snacks and spend all day on the lake with friends and not worry about falling behind. I could take out a waterproof camera and photograph the wildlife, cast a fly rod, or even try paddleboard yoga. The Hobie Mirage Eclipse also converts to a conventional stand-up paddleboard by removing the MirageDrive and handlebars, so I wouldn’t miss out on the traditional paddleboard experience, either.