You know the gut-wrenching smell that years of fish slime, blood, leaky milk jugs, and a host of rotten nasties leaves in your cooler? Now you can get rid of it quickly and without harming your cooler.

by Mike Disario, OutsideDaily, photography by Rob and Cody Reaser

Last year we came across a product called Fish-D-Funk that claimed that, with a single wipe-down of a moist towelette, it would totally eliminate fish stink and other odors from your hands. Although we were skeptical, we gave the product a rigorous testing over the course of several days of fishing. To our surprise and delight, it actually worked—not just “sort of worked,” but absolutely eliminated all trace of fish slime, cut bait, and chicken liver ooze from our hands.

Well, it’s a year later, and that means we’ve added another hunting season’s worth of bloody deer quarters, another camping season of leaky hot dog juice, and another fishing season’s worth fish slime to our cooler’s cornucopia of stains and alarming smells. Frankly, we were afraid we’d be kicked out of the parking lot now that tailgating season is here. After all, who wants to set up beside the guy with the cooler that smells like a garbage scow? Heck, we wouldn’t make good company to ourselves!

As it turns out, the same outfit that manufactures Fish-D-Funk also makes a formula designed specifically to not only eliminate accumulated odors from our workhorse coolers, but to also clean the coolers without damaging the plastic and finish. It’s called, appropriately enough, Cooler-D-Funk.

Cooler-D-Funk utilizes the same Double-Down™ chemical technology as the Fish-D-Funk product we tested last year. It’s called Double-Down because the solution performs two separate tasks. First, it neutralizes odors on the molecular level by preventing the odor molecules from vaporizing. Second, it encapsulates any odor molecules that happen to “get through” the neutralizing process and thus render them undetectable. Don’t ask us exactly how the solution does this (we’re not chemical engineers), but it’s enough to know that it does work and work effectively.

We tested Cooler-D-Funk by dragging out our rotten Igloo (complete with a fine layer of last year’s deer blood and who knows what else caked inside) and spraying it down with our 16-oz. spray bottle. It took around ten squirts to cover the bottom, sides, and lid of our cooler. Next, we pulled out two cleaning wipes and commenced to scrubbing. The smell vanished almost instantly, and the wipes made quick work of the built-up crud. We spent, maybe, three minutes scrubbing with the wipes and the layer of yuk was gone. After rinsing out the cooler with a garden hose, the job was complete and our Igloo hasn’t looked or smelled as good since we bought it over ten years ago.

In addition to its remarkable odor-eliminating properties, Cooler-D-Funk is an exceptional cleaner in its own right. In the past, we’ve used all manner of solutions to clean our coolers, including bleach water and baking soda. The problem with these and many other harsh cleaners is that 1) they rarely eliminate all of the odors, and 2) they can break down and mar plastic surfaces. Cooler-D-Funk, on the other hand, is safe on all surfaces and materials (although it can tend to whiten wood). After using Cooler-D-Funk, the inside of our Igloo was not only scent-free and clean, it shined like new.

On a side note, the benign chemistry of this product makes it perfect for cleaning not only coolers, but also bait buckets, livewells, and similar containers because it won’t harm your catch or your baitfish. It’s also environmentally safe.

Following our test of the Fish-D-Funk wipes, we were not surprised that Cooler-D-Funk worked as advertised to eliminate the “rotten” from our cooler. That it also knocked out the gross patina that had built up over the years was a pleasant bonus.

EDITOR’S NOTE: You can purchase Cooler-D-Funk from select outdoor retailers around the country. You can also find this and other D-Funk products direct on Amazon. 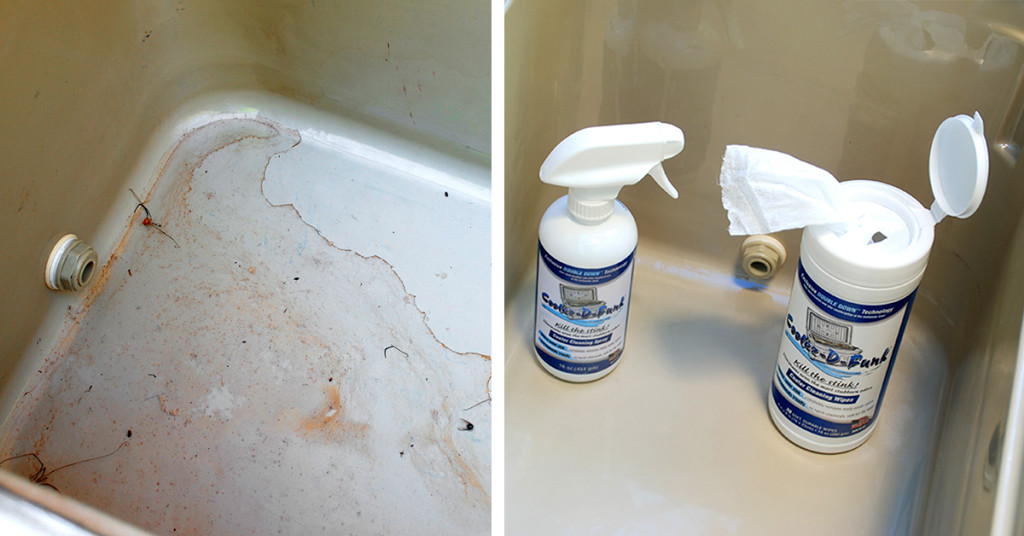